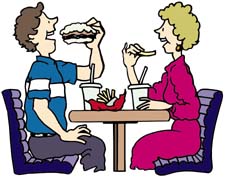 Come on, they're not that hard!

Answer: elevators -- only one death for every 100 million miles traveled. I suspect that the unlucky traveler at the 100 million mark tired of gazing at his shoes or staring straight ahead, and while tilting his head back to look up at the ceiling, broke his neck.

Question: Why do we say we're "parking" the car?

Answer:  in Normandy in the early Middle Ages, where they've adapted a Germanic word close to "park" to describe an enclosure holding game animals. The Normans invade England and establish deer parks. Eventually, English soldiers, after a day's march, circle their wagons and put their horses in the middle, calling that a park. Over time, any military vehicle moved to a set position is said to be parked. Then the act of doing this for any vehicle comes to be known as parking.

Source: WHY YOU SAY IT by Webb Garrison

Question: How come a hot, humid day is more uncomfortable than a foggy day?

Answer: On a hot, humid day, there's actually more total water vapor in the air than on a cool, foggy day. The reason: hot air can hold more moisture than cold air. High humidity -- but less than 100 percent -- tells us that at a certain temperature the air can still take more water before it condenses, even though it already holds plenty.

In a fog, the humidity is 100 percent because the cool air is saturated and the water vapor is already condensing. But the total amount of water in the air is less than on a sultry summer afternoon.

If fog bothers you, you can put on a jacket. But if its hot and humid, even stripping naked may not help because you can't sweat enough to cool your body. The only solution – no pun intended – is air conditioning

Source: WHY THINGS ARE & WHY THEY AREN'T by Joel Achenbach